What a time to be alive! Global pandemic, moments of the whirlwind bringing massive change and backlash, recession and economic struggles. It’s a turbulent time for everyone, and those of us working for social change are struggling to find steady ground to work from. In my last blog I explored grief, and how focusing on relationships lays the foundation of any decent strategy. In today’s post I look forwards and ask how can we campaign in this moment?

It’s a long read, so settle in with a cup of tea – or skip to the end for five practical approaches to re-vision and imagine the future.

Weeks ago none of us could have imagined that the murder of George Floyd in the US would spark off a global wave of protest, bringing previously radical demands into the mainstream in just days. A few of the outcomes so far have been:

Of course, as ever, this movement moment didn’t come from nowhere. There have been many, many years of US civil rights activism, the growth and slow power building of the Black Lives Matter movement, campaigns for reparations, to de-colonise public spaces, etc. All this hard work built the wood of the movement fire, but then the global pandemic (and it’s disproportionate impacts on black and brown people in the global north) plus a run of brutal US police killings, provided the tinder and the spark that set the whole thing ablaze.

Understanding moments of the whirlwind

Bill Moyer’s Movement Action Plan identified and mapped trigger events like this back in the 1980s. As shown in the diagram below, he claimed that when trigger events happen people respond with a huge surge in protest which raises public awareness. But this burns itself out fairly quickly. Then there follows an oppositional backlash (as we’re seeing from the far right), while activists lament the movement energy dwindling. Then as time passes re-trigger events, not as big as the first, grow public awareness and support slowly, before actually changing legislation / norms / behaviors further along the line.

In my experience, this is a pretty good summary of how big movement moments tend to go. But of course this happens cyclically, as the issue is rarely solved by even the biggest of changes that are effected.

Thinkers at the Ayni institute have elaborated on this theory with thinking around moments of the whirlwind , developing a movement cycle (which I have written about before) that goes from building popular support to escalating non violent action, before  finally absorbing that momentum back into the movement.

The initial attention on the Black Lives Matter movement has died down. White allies are settling into reading lists, protests are no longer attracting large crowds, activity simmers on but no longer grabs every headline. Many who rushed to coordinate mass actions may be feeling a sense of failure with the peak of energy passed. When we’re burnt out from moments like this (and just generally from living through a pandemic) feelings of despair can easily slip in. But there are many reasons to be hopeful.

Many people said: the giant Iraq war protests in 2003 failed; the Occupy Movement in 2011 failed. But the impact of these events can be interpreted in another way. The former changed the way people thought about UK military interventions (and stoked distrust of Government). The latter united people as the ‘99% vs the 1%’, paved the way for the tax justice movement in the wake of austerity, and subsequently spawned a whole host of campaign projects on the left. The UK Black Lives Matter movement has already achieved a great deal (see list above) & I have no doubt this is just the start.

2. It is a good moment for self care and collective care

Moments when movements quieten down are excellent spaces to prioritise self and collective care. We can create our own bubbles of the future we want every day, in our relationships with ourselves and those we love. Care, creativity, play, joy and nature are so important.

In order to be in a better place to respond to, or even to create, the next big movement moment, we need to build structures to engage people in quieter times. This means campaigns with engagement and leadership building at their heart, slowly building power, which can quickly absorb new people following future trigger events.

In the survey and calls I hosted following my last blog post, people from across the social change sector fed back that they are struggling with balancing the need to process what is happening vs a perceived urgency to respond. Many organisations have understandably gone into crisis mode, concerned about survival and immediate impacts on those they aim to support.

But people have found it difficult to engage with this while also taking the time needed to process the huge changes we’re seeing, on top of the grief of all we’ve lost to the pandemic (loved ones, health, work, money, freedom to move around, future plans). Worryingly, months since lockdown began across the world, many working for social change are still in crisis response mode, struggling to pause for reflection, and stuck in reactivity.

In a workshop I held for a range of folks working in social change recently, I found it helpful to use Elle Dod’s typology of change to analyse the shifts we’ve already seen vs bigger visionary changes we want to see. Below are just a few of the things we came up with:

1. Novel changes – things that have already happened we want to keep

– Appreciation of key workers
– Mutual aid and community connections growing fast
– Everything slowing down
– Increased food growing
– Desire for connection to nature, and a discussion around who has access to outside space
– The inadequacy of the benefits system becoming apparent to the mainstream
– Working from home meaning less travel and less London centricity
– Temporary ban on evictions

2. Evolving changes – this we want to build on and embed

In the workshop it was hard to break out of thinking about what might be incrementally possible working forwards from where we are now; but this kind of thinking really limits being free to imagine the world as we would truly want it. While big, lasting changes seem possible (since many things have already changed so fast), it is hard to imagine the beautiful future we want to create.

Five approaches to re-vision and imagine the future

Since visioning work is so hard to do, I reached out to some incredible trainers to crowd-source a range of approaches. If you want to do this with your group or team, you’ll need to carve out space from everyday activity, and then be prepared to use the vision to anchor your strategy and change your approach. I hope the suggestions inspire you – I’d love to hear how you use them.

1. Guided visualisation
(suggested by Holly Hammond of Plan to Win & The Commons Library)

A couple of variations for this are:

a) Ask your group to imagine the newspaper headlines they would want to be reading when their campaign has won, or at a further point in the future where the issue they’re working on is completely solved.

b) Invite the group to imagine going to the ‘museum of the revolution’ to see how the change happened over time. (Suggested by Ali Tamlit from Resist and Renew)

It’s worth noting that some people can be resistant or have feelings of hopelessness come up, so  consider how to hold this. It is difficult but these attitudes are at the heart of the need for this work. The system we live in works hard to convince us that only small changes to the status quo are possible – and unless we truly believe things can be different, we will struggle to make it so.

There are a few creative ways to imagine the future, which can be more accessible than the above reflection for some people.

a) Ask people to draw a picture of the future they’re working to create, which they can then talk through and explain.

b) Have a stack of magazines and newspapers and ask people to cut out and create a collage of the future to present and unpack – this may be easier for people resistant to drawing, and can work well on zoom. (Suggested by Sharon from Seeds for Change).

c) Ask people to choose from a set of strong, evocative images to represent the future they are working towards in, say, 5 or 10 years time. The images act to help them connect to the vision, and are a starting point for deeper exploration.
(suggested by Anna Llewellyn from CORA).

3. Go deeper into imagining with speculative and visionary fiction
(Suggested by Ali Tamlit from Resist and Renew)

I’m a real lover of Utopian feminist Sci Fi, and have found a lot of personal inspiration from books like Marge Piercy’s ‘Woman on the Edge of Time‘ – the utopian future imagined in this book is the closest I’ve come to a full imagining of the kind of world I’d love to live in. You could start a book group to explore some literary imaginings, or just find a short story or a poem as a starting point for discussion about the future you want to be working towards.

For deeper exploration of this idea, Resist and Renew ran a series of workshops earlier this year focused on imaging a better world through creative writing.

4. Imagining the many possible futures
(suggested by Holly Hammond of Plan to Win & The Commons Library)

This exercise is particularly suited to the uncertainty of now, bringing in not only the possibility of truly Utopian futures, but also acknowledging the peril we humans find ourselves in and the scarier futures that may come to pass.

This is a simpler tool for working out how to respond to a changing future than the exercise above – not quite visioning but worth a mention. Originally dreamed up by oil giant Shell, it takes a couple of variables likely to be significant in the future and imagines different ways they could go. These variables are framed in the diagram below as positive and negative but they don’t need to be as clear cut as this. 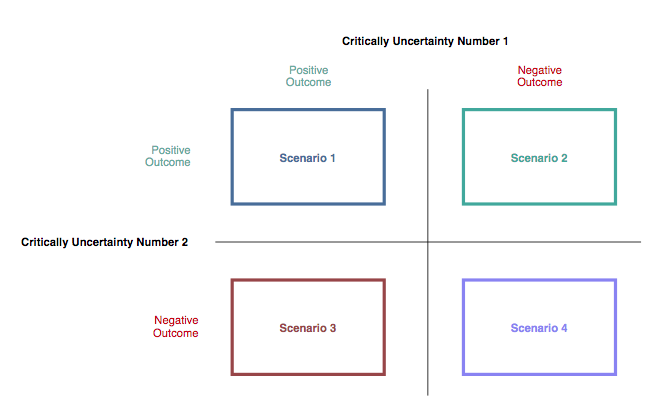 To give an example, the Local Trust recently commissioned The Long Crisis report which used scenario planning as a tool. They chose the variables of collective action vs increasing polarisation on one axis, and the response the the crisis being centralised vs being distributed on the other.

Whatever our vision, the big question is how do we get there? Those working for social change have always needed to flow, adapt and respond to the shifting context – in these uncertain times this is more important than ever.

I truly believe there is minimal value at present in having a clearly planned out strategy expected to run for several years. At any moment, the crisis could shift things again rendering your thinking and planning totally useless. This is likely to make organisations with long bureaucratic decision making processes increasingly irrelevant.

But if campaigning organisations and groups have a big picture vision they truly believe in, and a culture and structure that embrace emergent strategy, they are far more likely to succeed.

Principles will still hold – building grassroots power, gathering evidence, working with the media, organisising mass mobilisations. Much work can continue in the knowledge that it is likely to be relevant in future – but the detail will need to be worked out afresh as we go forwards.

How to do this, and do it well, is another question entirely! I’m curious about how campaigners are responding to the crisis and am reflecting on how to support strategy in this space. Please get in touch if you’re interested in discussing this – I may hold a mutual learning space if there’s enough interest.