With the far right on the rise and a corresponding surge of activism on the other end of the political spectrum, it’s a scary and uncertain time, but also one filled with exciting possibilities. How should campaigners respond?

I’ve been working in the UK campaigning sector for almost a decade now, but I quit my job last December in frustration that NGOs are just not adapting to the changing times. As the models for our existing civil society organisations become more old fashioned and less relevant, and their funding shrinks, many are becoming more risk averse, brand precious, fundraising driven, and rigidly fixed in the space in which they campaign. Organisations need to adapt – or they’re going to die.

To begin with professionalisation of campaigning was great. People were asking questions and developing robust models to think about strategy, tactics, planning, and evaluation. But somehow these things became written in stone as ‘the way things are done’. There’s a recipe rolled out again and again with media work, policy research, lobbying, digital campaigning (many tools of which, like email-your-MP actions, are really losing their efficacy), and small amounts of activist engagement.

While NGOs may chip away with incremental policy wins, look at where our government, and public opinion, is – compared with where most causes want them to be on environmental and social justice. This isn’t to say there isn’t great campaigning happening in the UK despite all of this. Some NGOs are doing great work. But it’s the exception rather than the norm.

With a little bit more resource to the grassroots and linked up working across everyone campaigning, imagine what we could achieve together.

Which campaigns are winning?

Two Canadian campaign consultants decided to do some research into winning campaigns, and published this in their Networked Change report. They looked at campaigns which had achieved a lot in terms of actual policy change and/or big shifts in culture / public opinion (impact) and then the relationship between impact and resources available (force amplification). As you can see from the graph below, this meant those in the top right corner ‘punched above their weight’, achieving a huge amount of impact with very little resource.

Their examples are from the US and Canada but the lessons are relevant across Europe and beyond.

How are these campaigns winning?

Lets look at a couple of examples:

This is a global campaign supported by 350.org  (whose Europe team I am lucky enough to be working with temporarily), but also others like People and Planet are also working on the campaign in the UK. We’re currently gearing up for a global divestment mobilisation, with actions spanning 5 continents planned 5-13th May.

Globally the campaign has already won 700+ divestment commitments, worth over $5tn! At the same time, this is a step towards the bigger aim – building a powerful movement to destroy the social acceptance of the fossil fuel industry and tackle climate change.

What has made it so successful? 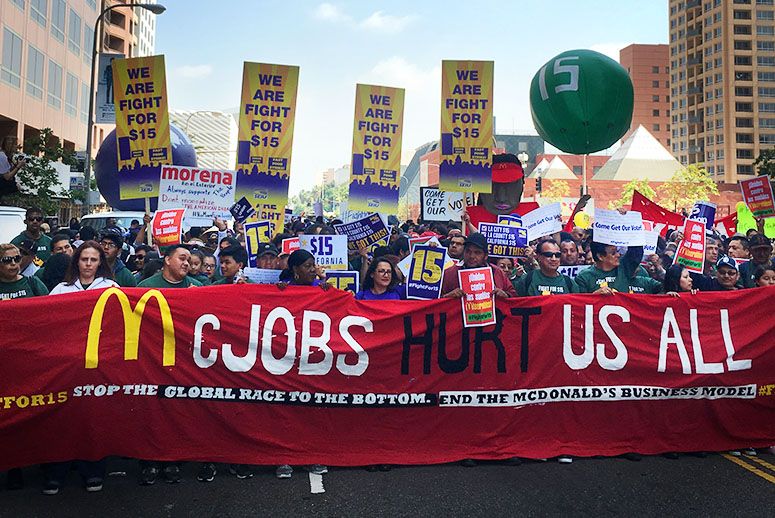 In the US, the SEIU launched this campaign calling for the minimum wage to be doubled from $7.50 to $15 an hour. But the campaign wasn’t just for this union’s workers – it was for everyone. Again it wasn’t union branded, but was led by #Fightfor15. Again, they developed resources anyone could use, meaning many started their own campaigns without union involvement. Some activists from Occupy Wall street have been involved in carrying the campaign forwards.

The core message “We are worth more” broadened the campaign from a fight for better wages to a movement for economic justice. And they built bridges with other campaign groups like Black Lives Matter, tying the cause to wider racial justice. Campaigners from #Fightfor15 attend #BlackLivesMatter protests and support what that groups is doing, building trust and reciprocation.

It has now spread across the US and beyond, has forced Walmart and McDonalds to raise their wages, and has driven up minimum wages through legislation in 22 states and 19 municipalities. Fight for 15  describes itself as “1000s of workers. Hundreds of cities. One movement. $15 and a union”. Inspiring stuff.

In the netchange report, there are four principles identified as being critical to the success of these campaigns. I’ve pulled some out in the examples above but here they are again.

Distributing agency (letting go of full control). Crowdsourcing ideas and content. Making the campaign adaptable and customisable by activists. This is key to building and showing people power. People have never had more energy to really commit to campaigning – if they’re given the right opportunity and freedom, the impact can be huge.

#Hashtag NOT brand is fundamental. People, especially younger generations, just aren’t supporting organisations any more – they support causes. Campaigns need to connect, convene, and serve partners and supporters. They work really well when they cross movement boundaries, seeking and including those outside of ‘the usual suspects’ – like the engagement of farmers in the opposition of the Keystone XL pipeline.

3. Frame a compelling cause

There must be a simple action worthy problem and solution. Equivocal messages that are internal NGO compromises won’t mobilise lots of people. Tapping into live social currents with storytelling works well, as does oppositional framing with clear heros and villains (villains can be structures or industries rather than just individuals). Using multiple channels for these messages is also important.

4. Run with discipline and focus

Campaigns work well when they are agile, test approaches, take risks and ‘fail fast’ learning as they go. Having a focus on key moments helps. Structures which organise as well as mobilise build depth of engagement, breadth and scale. Adequate resources for the fight are necessary. And strategy should be developed with a view to the long game – looking to build power over five-10 years to win big.

In the US, Trump’s coming to power has started to bring intersectional movements together joining forces against a common enemy, organising under the broad banner of #TheResistance. The challenges are great but there are exciting things afoot. I’ve just joined the meetup group London #Resist and #BridgesNotWalls are planning further actions. People are coming together at the grassroots. We need to be smart about where to put our energy and organise strategically.

I was lucky enough to attend one of the day long training sessions on this report and recipe for campaigning success, hosted by the Sheila McKechnie Foundation. I’m keen to have conversations with campaigners from NGOs or grassroots groups interested in the directed network campaign model.

I believe it could be very useful both for NGOs in crisis looking to change their model and for grassroots groups looking to scale up without compromising autonomy and without starting to form a more traditional, rigid, NGO model. Get in touch with me on twitter @tashahester, or the report authors themselves @netchange – they’re very keen for the model to be used.

If you’d like to hear a more in depth interview with report co-author @TomLiacas check out @jim_coe’s advocacy iceberg podcast.